Archive for the tag “hands up”

RAGE AGAINST THE SYSTEM

For the past couple of weeks, I have been deeply affected by the slaying of Michael Brown which happened right in the backyard of my hometown. I have followed and watched the turn of events with my stomach in knots, hoping that the fervor for justice continues in Ferguson, St. Louis and across the nation. Desirous of speaking out about this tragedy and the way Ferguson’s police force, the media and people in the community have responded, I wanted to publish a blog post about what I was feeling.

But then, one day last week, I was granted an opportunity to, once again, lead a creative writing workshop at Philadelphia FIGHT’s Institute for Community Justice. For our writing exercise, I asked participants, a group of about thirty people, most of them black men, to respond to the questions raised against police brutality and the argument that we, as a community, should first focus on “black on black” aggression. I gave the writers an option to choose from which angle to write an open letter to the community at large.

The ICJ writing group had plenty to say and I had to encourage them to put all of that excitement on paper.
They did. And then they gave me permission to edit and publish it here on LLFW. I am very excited to share this work and provide a platform for the writers of ICJ.

A Letter to My People by Sheewo
My fellow brothers and sisters, we need to wake up and realize that we are under attack. Slavery may be over by law, but it is still alive in the mind and hearts of a lot of those in power around us. Look around you. They don’t want us to succeed; they don’t want us to make it; they don’t want us to grow. They lock us away or outright kill us. They keep their foot on us and we attack each other out of anger and frustration instead of attacking the actual enemy at hand.

My black brothers and sisters, this has to stop!

We have to learn to stick together and keep each other alive. We have to take a stand and let it be known that we are worthy, that we are strong, that we possess the ability to excel past the negative stereotypes that have been stamped on us from birth. It’s time for us to raise up and fight back or they will make sure that we are exterminated. Together we are a superpower and that is why they try to destroy us.

My black brothers and sisters, it may be time for war. Our lives and freedom are still at stake. 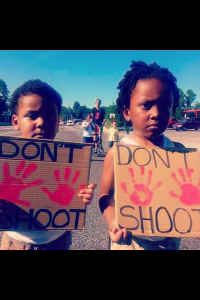 “Gun control means using both hands in my land. We as African Americans are being hunted. We are the targets and there has never been justice on these stolen lands.”  –DINK

THIS IS WAKE UP PEOPLE! –by Pattie P.

What is happening in our world today as a people?
Marvin Gaye would say, “What’s Goin’ On?!”
The police are killing our black people
Our kids for no reason.

Please WAKE UP PEOPLE
If we as a people do not do something soon
Our next generation
Will be extinct.
WAKE UP!


I am so, so, so tired of hearing, reading or seeing that another man has been slayed by the city’s biggest and most powerful gang—the police. The crime fighters and community servants have declared an open season on us young black men, Trayvon Martin and now, Michael Brown.

Not to take away from all the other tragedies that have manifested where the genesis of the situation where young black men who engage in conflict end up sparking bullets and putting holes in our young men— black men who are fathers, sons, brothers, future leaders, freedom fighters, writers, artists.

Personally, I believe that we need to police the police and crime in our own neighborhoods. We need to take personal responsibility for our own welfare and community. Violence begets violence, and surely that is not the only alternative. I favor a healthy balance of physical might and verbal might.

Still, how does an unarmed young man get slayed by a trained crime-fighting public servant? I thought that the first order of these trained and armed professionals is to protect the public, not rob them, rape them or slay them.

By ANY and ALL Means Necessary –by C. Casey
Why not start telling women who are raped that it’s their fucking faults for wearing such sexy skirts? Why not tell the poor four-year-olds who are being molested that it’s their fucking faults for being so cute? Saying it was Michael Brown’s fault that the police killed him is the equivalent of just that.

Saying that black on black crime is something to look at is a way to divert us as a people from seeing the truth: We are now being exterminated by any means necessary– jail, plain out murder or some sort of biological warfare.

God bless Martin Luther King and what he has done, but I think Malcolm X’s spirit needs to rise again because our children and their children are in danger and we must stop this—by ANY and ALL means necessary!!!

I Don’t Trust the Cops –by Mister Man
Cops have been killing blacks for years. This young man, Mr. Brown, had his hands up in the air. Now this young man can’t go to college, can’t raise a family, he can’t wish “happy birthday” to his mom, dad, sister and brother.

We all get looks from cops all the time. They can’t be trusted. I don’t feel safe around cops and there are a lot of people who feel the same way—they don’t trust the cops.

Aren’t We Bigger than “Black on Black?” –by Maurice 18
What I think about black on black crime is that it is ridiculous.
I mean everybody coming at the police for killing us—not to say that they are right—but we are killing ourselves. Every day, a black person is killing another black person.

Not to defend the police, but everyone is always coming at the cops, but we are not coming at each other. Black on black crime is the biggest stock in America and it is only going to continue to grow unless we as a people wake up. That is what we must do, “Wake Up!”

We can come together to smoke crack or weed, but we can’t come together as a people and get along with each other. Just a group of us—black people—sitting together, sharing good times without a fight or someone getting shot or stabbed.
I believe we could make that happen if we stop thinking we are better than each other.

This is a declaration of war.

We are no longer able to function as a society within a society without a life-giving, cathartic battle. Frantz Fanon said that armed rebellion would do more than just free us—it would be the salve that heals the psychological scars that plague us. In other words, to go to war would be “cathartic.”

We are at war. It is high intensity, brutal and genocidal. What other examples do you need besides America’s own history? What more do you need than manifest destiny?

We are already at war.